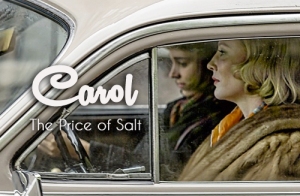 Carlo is an upcoming fill directed by Todd Haynes, based on the novel The price of Salt by Patricia Highsmith.  Cate Blancheet, Rooney Mara, Sarah Paulson and Kyle Chandler are part of this project.

The movie is set in the New York of the 1950’s, a young woman working in a deparment store meets and falls for and older, married woman.

The book The Price of Salt is the first book with a happy ending (or at least the possibility of one) that defied the lesbian pulp formula and because of th eunconvetional characters that defied stereotypes about homosexuality. This book was very popular, and now we will have the honor to see this incredible story in our screens.